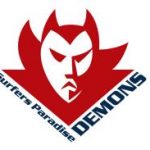 In 1983, the club moved to the Sir Bruce Small Park where they met Coolangatta in a losing Grand Final. They bounced back to win the 1984 premiership but lost in 1985 by five points.

Max McMahon was appointed senior coach in 1992 and he secured a Premiership in his first year. It was followed by a five-point loss in the 1993 Grand Final. The 1992 forward line that included Andrew Gibson a former Williamstown star forward, Gibson kicked 525 goals for the club in 78 senior games, an average of 6.5 goals per game. Half Forward Barry Oates starred in the 1992 finals series kicking 17 goals including 8 goals in the Preliminary Final against Burleigh Heads. Oates also went on to win the league’s Most Valuable Player award voted by the League’s coaches. Centreman Rod Brewster capped off a great season with selection into the Queensland state side. Ruckman Paul Hams won the club Best & Fairest Award with Oates runner up.

During 1996, the then Captain/Coach David Cameron kicked twenty-five goals in a game.

In 2000, The Gold Coast division was wound up and clubs played in an enlarged AFL South Queensland competition, after two seasons in which the club fell on hard times and the club was restructured to become The Surfers Paradise Australian Football Club Inc. It was relegated to Division two.

The juniors were formed in 1962 as one of six foundation members of the Gold Coast Juniors Football League and in 1964 the under 16’s won the premiership. The Under 18’s won eight consecutive premierships from 1965 to 1972.

Our Junior and Senior clubs have delivered fourteen players to the AFL: